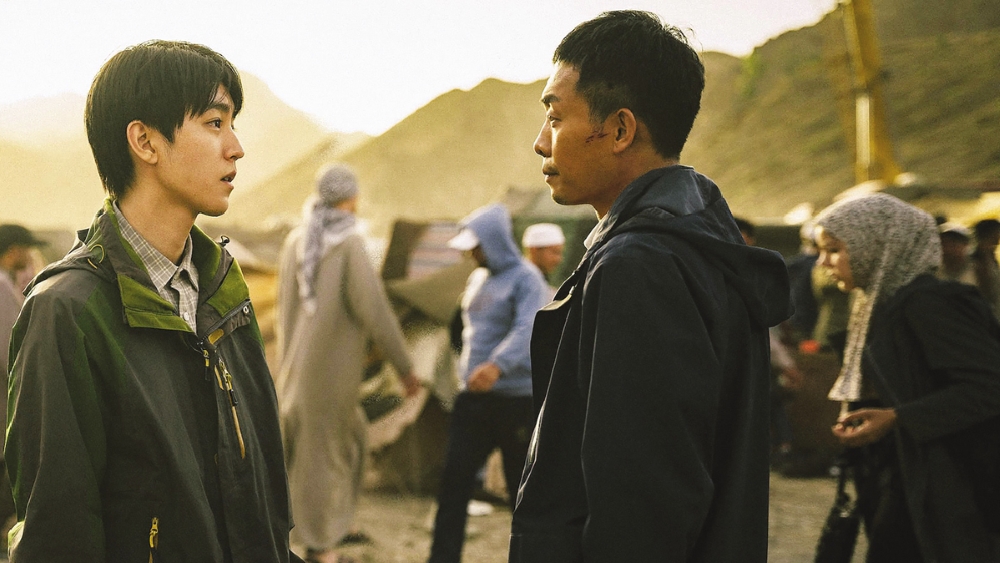 The patriotic action movie “Homecoming” dominated Chinese theaters over the weekend with a gross of nearly $60 million. But the National Day holiday season is in a deep slump compared to recent years.

Directed by Rao Xiaozhi, the film is yet another story of a heroic rescue of Chinese citizens in danger in foreign lands. In this case, two Chinese diplomats must return to war-torn Libya in 2011 to save 125 people left behind.

The film opened on Friday and earned an impressive $59.3 million (RMB421) according to data from consultancy Artisan Gateway. It represented an impressive 67% market share. Imax reported that the film was shot using Imax-certified cameras and that $3 million of the total came from their screens in China.

While the Friday-Sunday domestic total of $88 million was an impressive jump from the theatrical doldrums of the previous two weekends, the numbers were actually a continuation of the box office weakness China has endured for most of this year. The weekend of October 1st should have been much bigger.

China’s economic problems can now be added to the list, especially rising unemployment and a deep housing crisis, which may be taking a toll on people’s purchasing power.

The opening of “Homecoming” pales in comparison to “The Battle at Lake Changjin,” which topped National Day weekend last year with $203 million in three days. “Homecoming” falls short even next to second-ranked film “My Country, My Parents,” which grossed $76 million in its opening weekend in the same slot last year. And the domestic weekend aggregate of $88 million represents a 70% drop compared to October 1. 1-3, 2021.

A week ago, the box office prospects for the weekend looked brighter. And local analysts had forecast that the seven-day National Day holiday could bring in revenue of 3.3 billion RMB. That compares with RMB4.2 billion in 2021 and RMB5 billion in the year before COVID 2019.

Seven films with slightly staggered release dates had been lined up to hit the market during the period. Four were labeled as fitting the “main tune” description of “realistic patriotic plays focusing on stories about the nation, the Communist Party of China, and the People’s Liberation Army.” Other three are animated films.

Unfortunately, the launch of the favorite “Born to Fly” was postponed indefinitely on Tuesday (September 27, 2022), just three days before its scheduled takeoff.

The film is an aerial action-adventure about Chinese test pilots, which has been described in some quarters as China’s answer to “Top Gun.” (“Chinese excellent young pilots test China’s self-produced stealth fighter and protect the motherland’s territorial airspace without fear of hardship or danger,” according to the Global Times newspaper.) Directed by Liu Xiaoshi, it stars a gruff-looking Hu Jun alongside Wang Yibo, Yu Yosh, and Zhou Dongyu.

The producers’ explanation of the delay pointed to the need to improve the film’s special effects. But online commentators pointed to multiple overt similarities to “Top Gun.” The trailer for “Born to Fly” remains available outside of China on YouTube. “Top Gun Maverick” was not allowed to be released in China.

Data from Artisan Gateway shows that ‘Ordinary Hero’ ranked second over the weekend, grossing US$8.6 million (RMB 61 million), ahead of the remaining ‘Give Me Five’, on its chart. fourth launch weekend with US$4.9 million (RMB 34.7 million).

Fourth place over the weekend went to one of the animation titles, “New Happy Dad and Son 5: My Alien Friend,” which premiered on Saturday and earned $3.5 million (RMB18.2 million) in two days. . Fifth place belonged to another patriotic title “Steel Will”. It cost US$2.6 million (RMB 18.2 million).

On a year-to-date basis, Artisan Gateway estimates that this year’s box office in China lags 27% compared to 2021. The running total is $3.7 billion, compared to $5.09 billion.

“The year-to-date downward trend is very likely to continue in the coming weeks as year-over-year comparisons look challenging,” the company said.

‘The House of the Dragon’: Explained the history of Targaryen incest

Lee made his magnum opus over the course of six years. Then, in the mid-'90s, he stopped making movies altogether. Outside of...
Read more
ENTERTAINMENT

“House Of The Dragon” Episode 7 Summary Of Thoughts

Google Pixel Watch will launch soon. This is what we know

Rep. Eric Swalwell (D-Dublin) said Tuesday that a man called his office and threatened to show up with an assault rifle to kill the...
Read more

Become a politician; without selling your soul Since Paradox Interactive announced win 3I have been in a state of semi-disbelief. It was a...
Read more